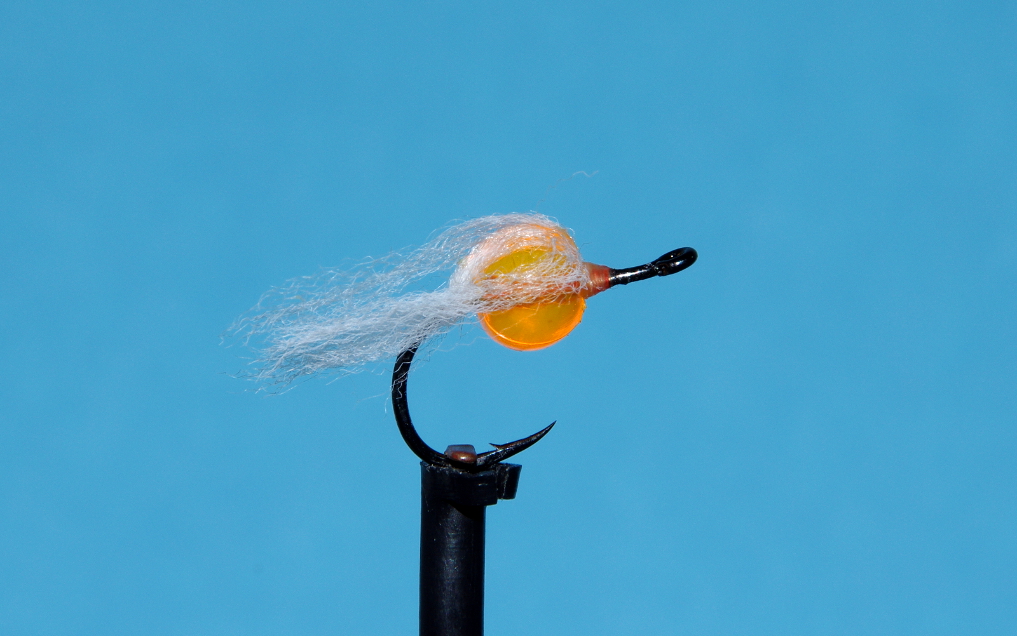 One can imagine the classic model and image of fly fishing, possibly in the style of Norman Maclean: spring creek browns with size 18 BWO duns, freestone streams with size 10 golden stones, or down and across swinging with wet flies on a chalk stream.  Probably toward the bottom of the list, for the purist, would be one of the most effective patterns for trout and salmon, eggs!  Egg fly patterns, for better or worse, are extremely effective nymph patterns (nymph used generally) and are responsible for huge numbers of steelhead in the Great Lakes, tons of browns and rainbows on western tailwaters, and are more or less required for leopard rainbow fishing in Alaska during the salmon runs.  I am a firm believer in the notion that the way you catch a fish adds meaning to the experience, so if you have some sort of philosophical grounds for not fishing eggs, then read no further.  This article and video outline the nine most common egg fly pattern styles and how to tie them, in order to inspire new patterns and techniques and to provide exposure to these styles as well as to the most common/best colors, materials, and hooks.  The second part of this two article series covers why to use the egg fly patterns and in what situations.

The Glo Bug has been a staple egg fly pattern for decades.  It is formed with either one or two sections of egg yarn tied and clipped to make a ball with varying degrees of density.  Dots on the egg can be made with a portion of egg yarn in the middle or by marking the yarn with a marker.  A huge variety of colors or yarn are available and this pattern is extremely easy to tie and effective to fish, particularly when an opaque egg is desired.  Tyers have used straws, such as the miracle egg tool, to compact the yarn correctly and to aid in proper proportions and less waste.  The two primary materials for this pattern are standard egg yarn and McFly Foam.  McFly Foam is on average better for making glo bugs as it makes it easier to achieve a nice tight egg, even when tying the foam on one side of the hook.  However, with straw mechanisms and when a tight egg isn’t as important or even desired, egg yarn is very good.  The best colors vary depending on your stream and regional traditions.  For example, Michigan fisherman and guides have multiple colors similar to the clown egg with their patterns more so than I have seen anywhere else.  The fish that may be dropping eggs will also influence your choice on colors, but this goes for all of the other egg fly patterns as well.  These are my most recommended egg colors in order of use, but almost any color will work at given times.

Chenille has great attributes for tying egg fly patterns, and it makes it so easy to tie them.  A simple chenille egg is simply chenille wrapped in a ball.  I have some micro chenille that I use for micro eggs, but other than this, I usually use estaz of various sizes.  Chenille, or whatever you wrap around to make an egg shape, is also good for making the middle portion of veiled/bubbled eggs.  You can use any color of the rainbow, but the top colors in estaz for me are pink, peach, butter rum, and chartreuse.  Depending on the size of the fly or the effect you want, use either petite or medium estaz.

Veiled or bubbled flies are just that, a fly that is formed by veiling egg yarn over a small egg shaped fly or by forming a bubble by tying down both ends.  In the latter case, there is often a small egg shaped fly as well, but this is not necessary.  For a veiled egg, I prefer egg yarn.  You can mix and match various colors to get interesting contrasts or you can use standard white.  If you like, Hareline offers Egg Veil in white, but white or egg colored egg yarn works just fine.  For, a bubbled fly, egg yarn works well also, but antron makes a very nice bubble fly.

Another simple way to create an egg is to dub an egg shape onto your hook which gives you a versatile dubbing egg fly pattern to work with.  You can do this with dubbing and a dubbing noodle or with a dubbing loop to give the fly a bit more translucence.  I more or less only use egg yarns of the same colors described above.  I cut the egg yarn into a fine dubbing, and a little goes a long way.  This is a surprisingly versatile way to tie an egg fly, and this style is perfect with micro eggs.

Sucker spawn is an egg fly pattern tied with a series of loops with any material you want, but angora has been a traditional material for this pattern.  Egg yarn and chenille are my favorites for this particular pattern.  This pattern is heavily used in the Great Lakes region and many western fly fisherman have no idea this pattern even exits despite its popularity in the East.  It may have been originally based off of an actual sucker spawning, but this pattern is extremely effective on its own merits rather than as a simple imitation of sucker eggs.  The four most popular materials are chenille, egg yarn, angora, and sparkle/diamond braid (not the flat stuff).  The same colors apply to this pattern in yarn and chenille as above (petite, medium, and micro estaz), plus white in the micro yarn.  Popular colors in angora are flesh, salmon egg, cheese, white, cream, champagne.  Great colors for diamond braid are pearl, pink, orange, fl. orange, chartreuse.

I refer to this next group as “pierced”.  This refers to premanufactured, or premade by hand, balls that you pierce onto the hook either from the hook point or eye.  The two most popular eggs for this are Otter’s Soft Eggs and Krystal Glo Balls, but little balls bought from the craft store work also.  You can pierce these on and add a bit of super glue, and you are done with the fly.  Otter’s Soft Eggs are extremely lifelike, even more than beads but nowhere near as durable.  Best colors for Krystal Glo Balls are pink, cheese, bubble gum, orange, salmon pink roe, and chartreuse.  You can get them in small, medium (7mm), and large (10 mm).  Otter’s eggs come in a variety of colors with apricot, tangerine, tango, kiwi, and dead egg white.   They come in single eggs (7 sizes) and various clusters.  3mm-4mm are micro eggs for imitating trout and whitefish eggs.  6mm is sized for steelhead, lake-run browns, and kokanee/sockeye.  8-10mm are obviously for the bigger salmon or just fishing a bigger sized egg.  They come in “see thru”, sparkle flash, and glo/opaque.  I like them best in “see thru” since other eggs can imitate opaque eggs just fine, but they are very life like, the most of any egg pattern available since they are not only great-looking but also soft.  I like these eggs a lot since they are more versatile for tying softer egg fly patterns than beads.

Another way to produce a realistic egg is to use hot glue.  These eggs are translucent and look very good.  They are decently durable and catch fish.  They are also much more affordable than Otter’s Eggs, but not as soft.  It also takes a bit of practice to get the eggs perfectly round and consistent.  The glue gun for this is usually designed for 5/16” sized glue sticks, i.e., the glue sticks are 5/16”.  Best colors are Oregon cheese, orange roe, champagne, pink lady, chartreuse, and clear.

Beads have taken the fishing world by storm in the last fifteen or so years.  Beads have always been around, but they were more used by attaching to an actually hook.  This style of attaching beads might be good for some egg cluster flies or something, but pegged beads are far superior to attached beads and provide a good hookset on medium to larger fish.  They are effectively fished dead drift but are commonly fished with a sideways sweep of the rod so the hook catches the mouth of the fish more effectively.  Either way these beads come in any color imaginable and can add to your egg arsenal.  Alaska guides are known to insist on the perfect colors with just enough nail polish on them in order to match the perfect bead color.  I personally think this is a bit extreme since you can catch fish on many different colors of beads almost any time you go out as long as they are in the ball park of the various egg stages in the water.  Find the best colors for your streams with the dozens of colors available.

I am always testing hooks for all species and am quite picky about my hooks and constantly experimenting to find the perfect hook for the species and fishing situation.  With egg fly patterns (and all patterns in my book), choose a hook that has the finest wire yet sufficient strength to hold the fish you are pursuing.  I like a wider gap for most of my patterns.  For standard trout, scud hooks work just fine, and my favorites are Tiemco 2487 (down eye) or 2488h (straight eye).  Once you start encountering bigger trout all the way up to steelhead and salmon, then you have to go stronger.  Owner Mosquito hooks (with finer wire) are my favorites with Gamakatsu C14s a close second.  Tiemco 105s, Gamakatsu and Owner SSW Octopus (needle point) hooks, and Daiichi 2553 and X510 are also superb options.  For egg fly patterns like sucker spawn, the Tiemco 3761 and Daiichi 1530 (#8 and below) work very well, and the Daiichi 1530 #8 has accounted for my biggest steelhead and brown trout of the Great Lakes.  The Owner Mosquito hook works well with sucker spawn patterns as well, though, and has only recently become my favorite.

So, that’s it.  Go out and change the world with your new patterns, or just try some new styles of egg fly patterns on your home waters.  Egg fly patterns aren’t just good for trout and salmon by the way; rough fish love them too.  Don’t forget to leave a reply if you have favorite patterns or you have a comment/question.  In closing, it’s worth noting that in mythology and biology, life comes from an egg.  It shouldn’t surprise us, then, that carnivorous fish want to take that life away by devouring thousands of eggs.  You might as well teach them a lesson for being so cataclysmically greedy.