FLY FISHING WITH NYMPHS: HOW TO SELECT THEM 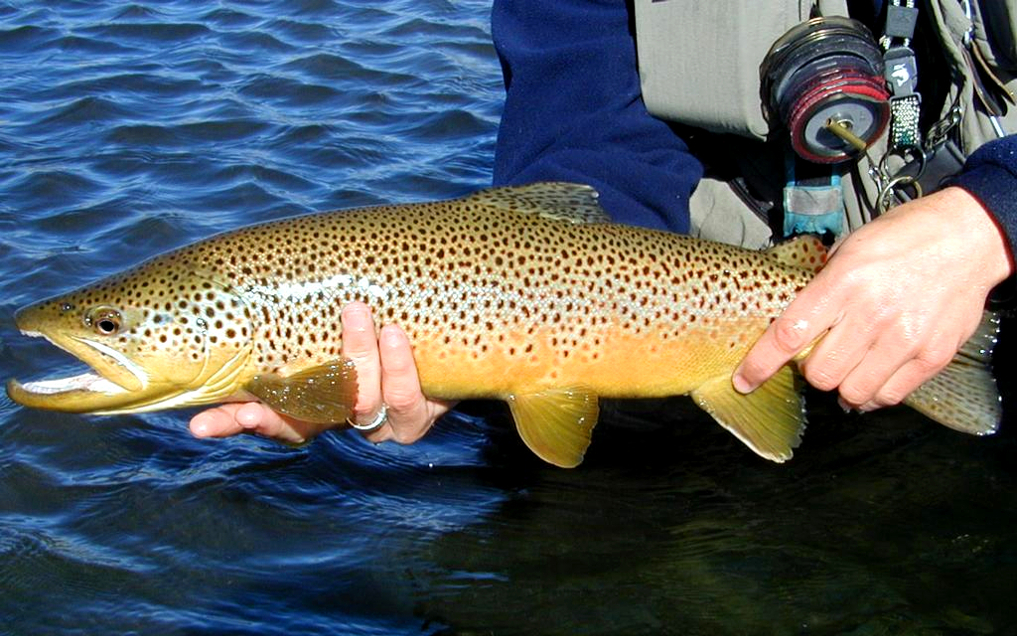 The great Florida bonefish angler, Tim Mahaffey, tells the story of how Tim Borski (the artist and fabulous fly tyer) looked at the paltry variety of patterns found in his fly box.  Borski, with his fabulously tied assortment of flies, was a bit surprised, if not bummed out, to learn that Tim Mahaffey fishes more or less three different flies for all of his bonefishing (weighted differently).  Not another Tim, but a Jim, Jim Teeny that is, is famous for using essentially one pattern for all of his fishing (saltwater and freshwater), his Teeny Nymph.  These two anglers prove that an angler can not only be successful fishing a few flies, but that it is probably preferred in order to concentrate on presentation.  If you’ve got nymph selection down, then more power to you. Over the years, I’ve developed certain guidelines for my nymph selection to avoid a willy-nilly approach to fly fishing with nymphs. You should take these as guidelines and not gospel.  If anything, this article will help you to think about your own system for nymph fly selection. 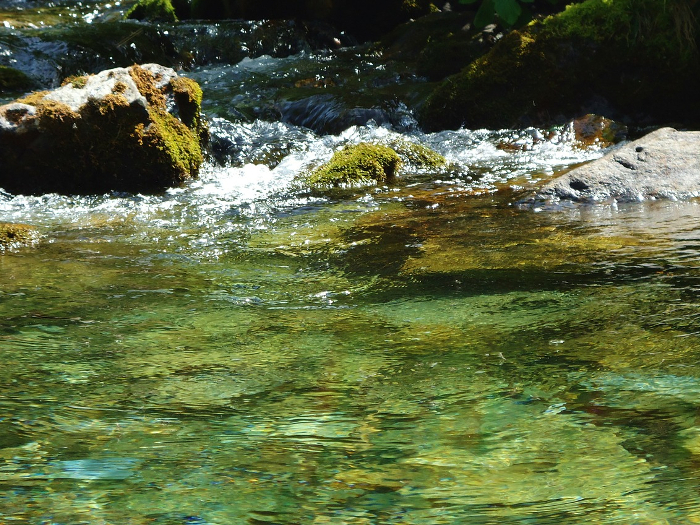 When fly fishing with nymphs, there are six main types of water on any given river that is not so big it begins to resemble a lake: runs, pocket water, riffles, flats/tailouts, slicks/edges, and pools, which are more or less listed descending from fastest water speed.  I will assume that you know what each of these waters is, but to be clear “flats” are simply that, areas of a river that have more or less a uniform surface with a water speed of varying flows.  “Slicks” are areas behind boulders, islands, or really any obstruction, and “edges” are basically that, the banks of each side of the river in addition to water moving right up onto an island etc.  All of these parts of the river provide unique aspects with respect to water speed, depth, and motion, which you can see from the table. It should also be noted that bottom content and cover will affect where a fish is holding tremendously within these particular types of water, i.e., if there is a boulder or a trench within a run, this fact will obviously affect how fish use that piece of water.  Finally, don’t forget that these seem like clear cut “types” of water, but in reality these may transition into another type.  Edge water might be more like a run etc., so use this as a reference, and try to break down pieces of water according to features. 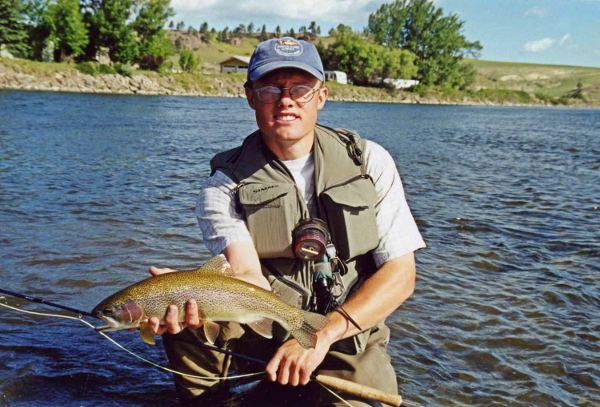 Once you can figure out the most likely holding areas of a given river and time of day/season, you will have more or less two choices to make: are you searching or targeting.  Your answer will depend on a few factors: the size of the river, the amount of fish, whether or not you can see the fish, the life cycle of the fish, and the seasonal conditions.  In general, larger flies (for the river) are much better for searching, so keep this in mind before you tie a fly on.  In addition, fishing pressure usually necessitates smaller flies or really big flies like streamers for the real predators of the stream.  So consider these generalizations before you decide on the other aspects.  After this, there are five main triggers: flash, color, size/proportion, profile/shape, and movement.  Note that I personally have rarely, if ever, encountered a situation in which “exact imitation” is a reliable trigger. 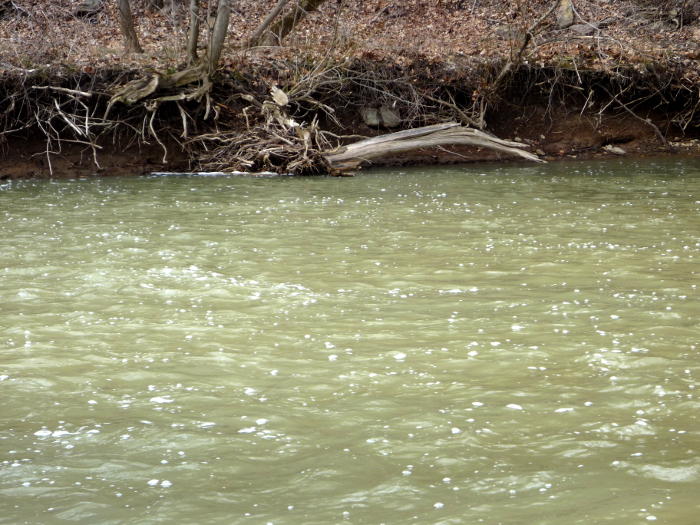 Size and proportion are probably the most important factors of nymph selection.  You can get away with a lot of things in a fly, but if you are way too big or small, you’re going to have a long day on the water.  The biggest factor for deciding size is the predominance of prey species in the watershed.  You should go bigger when lots of big stuff is in the water or water system in general but also in faster water, murky water, warm water, and when you’re searching rather than sight-fishing.  Attractor patterns are normally bigger in nature, so they should be considered when you are fishing bigger.  I define attractor patterns as exaggerated versions of the naturals or large patterns in general that are more imitative.

The surer you are where the fish are, the smaller you can go if necessary, that is, when you’re not searching for fish and either sight-fishing or at least know that an area holds a lot of fish.  As pointed out above, pressured water often requires smaller flies.  Finally, sulking and resting fish can be coaxed with either large or small flies depending on a lot of factors.  Sometimes a big meal is just too good to pass up, particularly when the fish’s metabolism is up.  At other times, a small “harmless” nymph presented right on the fish’s nose will do the job.  As much as we all want nymph fly selection to be like a cooking recipe with totally predictable results, that is unfortunately not reality. 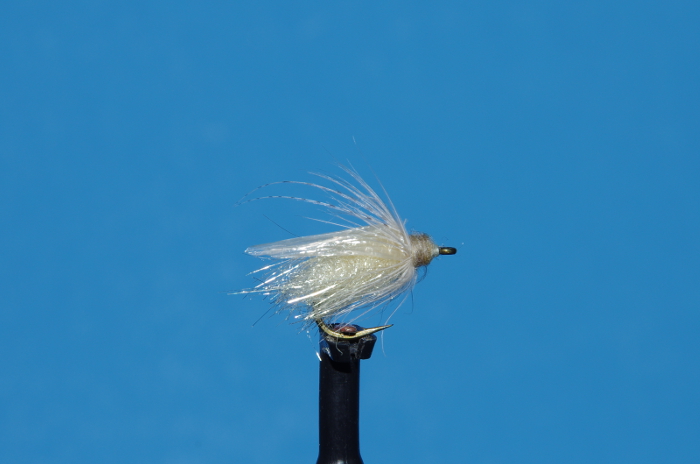 Profile is hugely underrated and may be the most important trigger within reasonable parameters (general color and size).  The reason for this claim is that profile is important with both smaller and larger flies.  My grandpa used to make duck decoys that were nothing more than silhouettes consisting of black spray-painted pieces of wood.  Basic shape or details like our shadow are the first thing we notice when someone approaches, and then we fill in the details as they get closer.  In fast water, fish don’t have the luxury of inspecting the fly, so the shape has to be great to get the fish to commit more often than not. 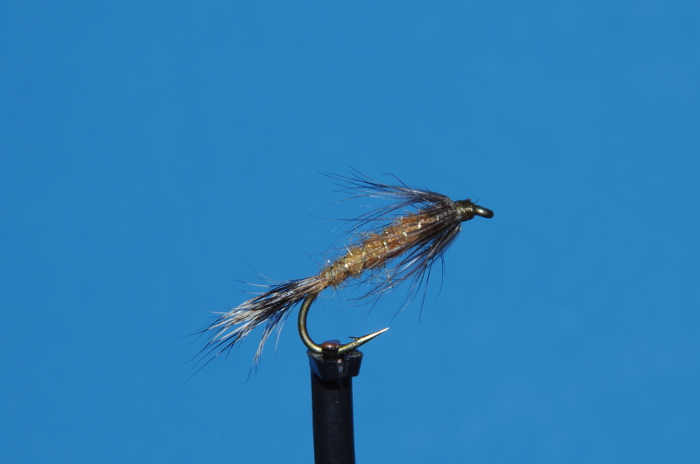 In slow water, the fish gains interest and sometimes commits fully simply on the shape.  That’s why ten different guys, fishing ten different fly patterns, but with the same shape, catch fish.  You can fish a fly that looks like a caddis pupa with perfect triggers of everything else, but if you don’t have the right profile, you’re done.  In other words, make sure you have a great profile for every fishing situation you encounter, this may be very close to one particular insect during a hatch or just a plain buggy look in between hatches. 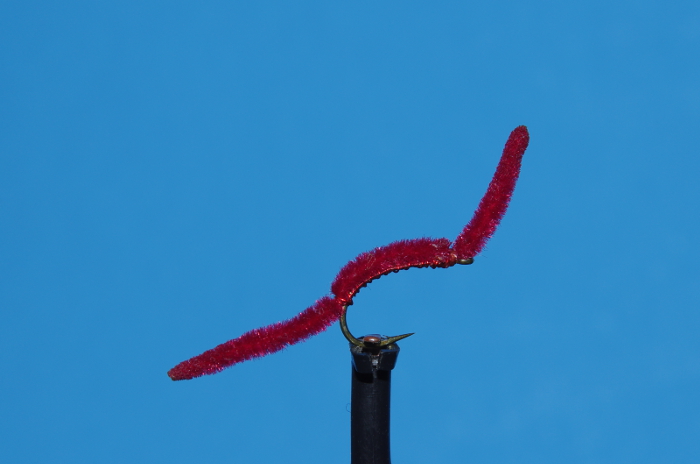 I find color to be less important within reason when fly fishing with nymphs unless you are talking about eggs, anadromous species like steelhead, or spawning fish.  I do, however, feel that color is hugely important with respect to light and dark.  Dark patterns accentuate profile and are easier to see in deep water.  For this reason, darker patterns (blacks, browns, dark olives, dark reds etc.) are best when profile is most important.   Also, during emergence, insects usually get darker in color anyway.  I have found that lighter colors are more productive on sunny days, because fish can see more of the detail when the sun is out, but dark colored patterns can be equally effective on these days.  Situations where light penetration is high make lighter colors more effective than they would be in a situation with less light penetration.  Here’s a word of caution, though.  When you are fly fishing with nymphs on a highly pressured body of water, you may want to try lighter patterns particularly in sight-fishing situations.  Also, bright chartreuses etc. can be seen in murky or deep water, so experiment.  The color of the naturals should always influence your fly choice, since this may be a major trigger with uniquely-colored insects and crustaceans. 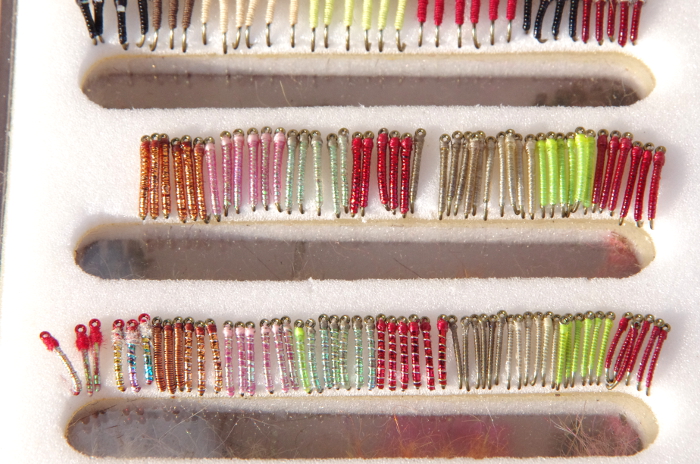 When we see a flashing light or a little glimmer, our eyes are drawn to it.  It’s the same thing with fish.  This can be either good or bad, depending on the situation, but flash is as difficult a trigger to predict as anything, so experiment on a given day.  There are some guidelines for flash when I hit the water that have been pretty consistent for me.  Flash is most effective in slow to moderate flows.  This is for two main reasons: 1) in fast water, a nymph can get lost in the commotion if it has a lot of flash, and 2) a fish can see this flash in these slower flows much more readily.  Shallower and clear water actually makes more sense with flash as well, since light penetration diminishes at depths and when there is poor visibility.  You can put flash on the fly, but it doesn’t matter if light penetration isn’t high enough.  Finally, when insects emerge, they move more and can generate air bubbles etc. during the emergence.  This makes flash a little more natural at these times and may be a trigger during the emergence to get the fish’s attention. 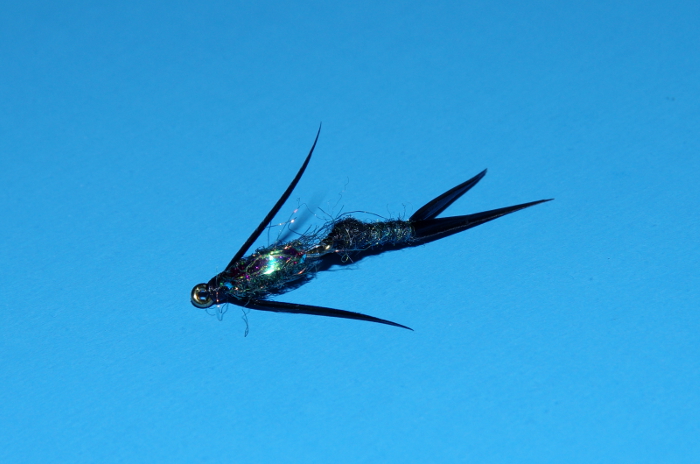 Movement with nymphs is somewhat underrated.  I am not talking about the various presentations that can be used with nymphs but rather the inherent movement found in a given fly, say a fly that is articulated.  If you examine nearly any insect larva, pupa, or nymph you will see movement.  Fish see this too, and movement in a nymph will give you an advantage if no one else is doing it.  For nymphs with movement, slow to moderate flows are the best.  Like with flash, you don’t get the benefits in fast water, since there is so much movement already.  In fact, more or less the exact situations are best for both flash and movement (shallower and clear water, when insects emerge, as a specific trigger), since these triggers need light to really shine, pun intended.  Here are these guidelines in table form. 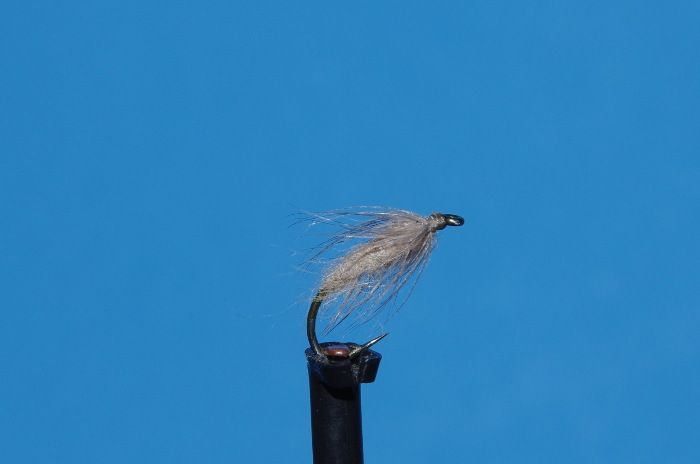 Finally, hatches should be approached with some general common sense.  The size of the insects obviously affect the size of your imitations, but the lack of a hatch usually opens up the opportunity to fish bigger, unless the stream is chock-full of small stuff like micro scuds.  You can fish dead drift minnows and larger “junk food” patterns like this, such as craneflies, worms, crustaceans, eggs etc.  Attractor patterns are great at this time as well.  Other nymphs that I fish when a hatch is not going on and depending on the time of year are midge larvae, more natural toned mayflies, more impressionistic patterns in general, caddis larvae and even pupae, since there are often so many caddis around when they begin to emerge (general time of year), and stonefly nymphs.    During hatches or emergence, I fish midge/mayflies as the darker pupa/nymph version of my flies, caddis pupae, and stones. 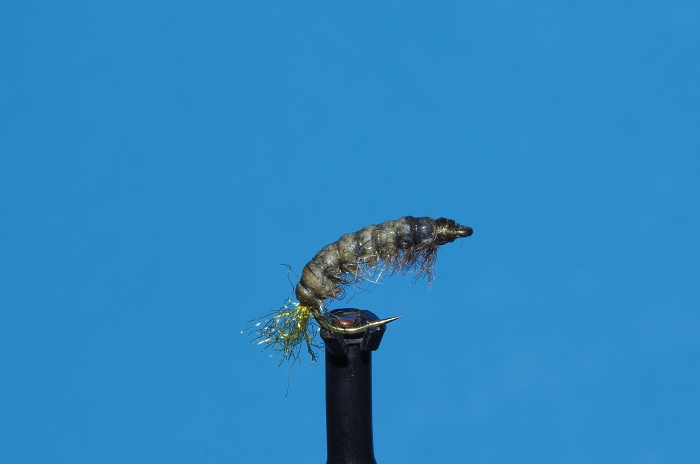 Along with this, “drift” (when insects and small crustaceans drift in the water column for whatever reason in large numbers) and at certain times of year, I will fish natural sowbug and scud patterns.  Patterns that imitate a lot of prey items, like soft hackles, can be great when there are a lot of insects in the water and the fish are feeding on multiple types of prey items.  Now, take a look at the final table, which puts all of this together.

Very few things in fishing are certain, but the key to success in really any fishing is to see what the fish want as fast as possible, which means patterning fish on a given day.  Some days, we can be brain-dead and still catch fish, and on other days, the smarter and more skilled anglers catch the fish.  I use these guidelines to get me started and then switch flies as purposefully as possible after that.  If this seems like too much thought, there is the other alternative…the Teeny Nymph is a proven pattern! 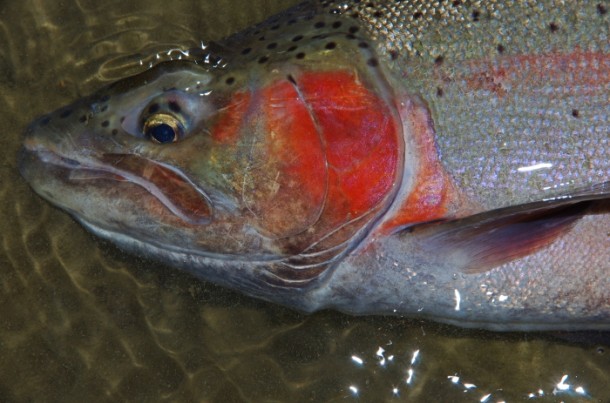